Plaintiff had a product patent in respect of ‘Liquid Heating Vessels’. Plaintiff claimed that Strix U10 Series Controls were sold by it first in 1996.

Claims in the Patent:

The principal claim of the patent is that of a liquid heating vessel comprising a liquid receiving container and an electrical heating element provided in thermal contact with the base of the container. It is stated to contain a thermally sensitive overheat control comprising of at least two thermally responsive sensors arranged “in good thermal contact with and at spaced apart locations on the base of the container or the element said sensors individually being operable, in the event of said element overheating due to the vessel being switched on dry or boiling dry but not during normal boiling operation of the vessel so as to interrupt or reduce the supply of electrical energy to the element.” In other words, the control works based on sensing the temperature of the element. The element gets switched off once a certain temperature is reached. For the sensors of the plaintiff’s patented product to work, therefore, there is no need for the container itself to contain the liquid. 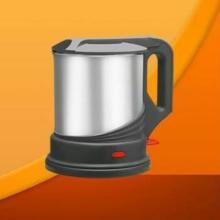 Patent has been validly granted to it and has not been revoked till date.

• Electric kettles were earlier being supplied by the Plaintiff to the Defendant in the years 2005-2006.

• Products of the Plaintiff were of inferior quality and, therefore, the Defendant commenced importing electric kettles containing the impugned heating element, from China.

• Defendant is a trader and have not undertaken any manufacturing activity.

• Electric kettle of the Plaintiff containing the sensors was a normal feature and did not constitute an inventive step. It is submitted that the European Patent constituted the prior art which taught the patent for which the Plaintiff holds registration. Moreover, the drawings submitted to the European Patent Office created a doubt as to the validity of the patent. It is contended that the invention that has been patented is, in fact, not a new one but is at best a re-arrangement of an existing invention which in any way was taught by the prior art which is available for anyone to commercially exploit.

• At an interlocutory stage, the Defendant should be held to have discharged its burden of raising a ‘credible challenge’ to the validity of the Plaintiff’s patent by merely pointing out the existence of the European Patent.

Defendant has till date not indicated the name of the supplier in China from whom the electric kettles have been imported and sold by it in India.

An internet print out of the extract of the specification in relation to a European Patent has been placed on record by the Defendant. It talks of “a temperature control device for a fluid heating vessel”. However, the patent of the Plaintiff appears to work on a different principle.

The essential difference between the product manufactured using the Strix patent and the product made using the European Patent is this: the Strix patent product is a temperature control device which is linked to the element itself and, therefore, when the element reaches a certain temperature, the circuit is broken and the device is switched off. This prevents the overheating of the element itself. A final view will be taken by the Court, at the end of the trial, upon an independent assessment of the evidence, uninfluenced by this order.

In order to raise a credible challenge to the validity of a patent, even at an interlocutory stage, the Defendant will have to place on record some acceptable scientific material, supported or explained by the evidence of an expert, that the Plaintiff’s patent is prima facie vulnerable to revocation. The burden on the Defendant here is greater on account of the fact that there was no opposition, pre-grant or post-grant, to the Plaintiff’s patent.

In the instant case, the prior art cited by the Defendant, i.e. the European Patent, is not even prima facie a prior art that teaches the Plaintiff’s invention. It works on a very different principle.

Further, Defendant has been unable to show that the Chinese supplier from whom it is purchasing the infringing product, holds a patent for it. It is not even the Defendant’s case that the said product per se does not infringe the Plaintiff’s patent. The only defence is that the Plaintiff’s patent lacks novelty and its validity is vulnerable on the ground of obviousness. This, for the reasons already discussed, has not even prima facie been established by the Defendant.

There is no merit in the contention that in terms of Section 3(f) of the Act, the patent ought not to have been granted since the invention is a mere re-arrangement of known elements. In the considered view of this Court, such a contention cannot be accepted on a mere averment by the Defendant. The Defendant will have to place on record some scientific literature supported by some credible expert opinion to show even prima facie that the Defendant’s product is a mere re-arrangement of already known products. This burden has not been discharged by the Defendant.

Dharampal Premchand Ltd. v.  Golden Tobacco Products 2007(34) PTC 633 (Del.) (DB) Decided on: 08.05.2007 Plaintiff had filed a suit for infringement of it’s trademark ‘BABA’, for breach of it’s copyright and for passing off. The Defendant filed an application under Order VII Rule 10 of the Code of Civil Procedure, 1908 seeking rejection of…

Lupin Ltd. v. Johnson & Johnson and Shakti Bhog Foods Ltd. v. Parle Products Pvt. Ltd. Bombay High Court (Full Bench) Date of decision: 23.12.2014 Issue: “Whether the Court can go into the question of the validity of the registration of the plaintiff’s trade mark at an interlocutory stage when the defendant takes up the…