Condition & Limitation: REGISTRATION OF THIS TRADE MARK SHALL GIVE NO RIGHT TO THE EXCLUSIVE USE OF WORD ‘MALABAR’ AND ALL OTHER DESCRIPTIVE MATTERS 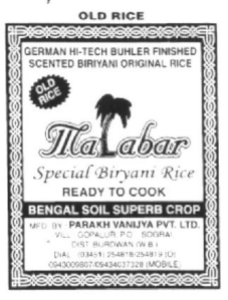 The appeal was dismissed.

Daimler Benz Aktiegesellschaft & Anr. v. Hybo Hindustan 1994 PTC 287 The Plaintiffs being a famous German car company and it’s subsidiary in India, filed a suit for permanent injunction restraining infringement of trade mark against the Defendant towards use of it’s trade mark ‘Benz’ along with the device of a three pointed human being…

IN THE SUPREME COURT OF INDIA S. Syed Mohideen v. P. Sulochana Bai 2015 (2) RCR (Civil) 810 Decide on: 17.03.2015 Respondent was a registered owner of trade mark ‘Iruttukadai Halwa’. Respondent was in the business of selling halwa in the aforesaid name since 1900 through it’s father-in-law. When Respondent found that Appellant was also…