The Bombay High Court in earlier part of the year 2020, has dealt with the case of permissible limits of action of viewers who review products or services. The decision is in the case of Marico Limited v. Abhijeet Bhansali[1] wherein the Learned Single Judge of Hon’ble High Court of Delhi restrained by an order of temporary injunction a social media influencer in regard to a video in which he reviews a branded Coconut Oil and compares it with Virgin Coconut Oil. The Learned Single Judge found the Video to be false and disparaging. The Influencer in question filed an appeal which reversed the findings of the Learned Single Judge subject to certain modification in the video. In the present literature, being Part I we provide you a summary of Learned Single Judge’s decision and key take aways. In subsequent part being Part II we will cover the Division Bench Judgment and the resultant ratio.

If the Defendant intended to create an educative video with the consumer’s interest in mind, Defendant should have approached any independent laboratory to conduct tests. Food Safety Standards Act, 2006 in Section 40 provides for a remedy whereby a Purchaser can have a food analysed by a Food Analyst on payment of a fee.

On Test of Disparagement

On how Defendant’s Statements are False

On how Defendant’s Statements were Malicious or Reckless

On Special Damages Caused to Plaintiffs

Plaintiff has suffered special damages in the present matter as the Defendant’s video assumable has been liked by two thousand five hundred (2500) individuals and thus the impact of the video on Plaintiff’s reputation and damage caused to it cannot be underestimated.

On Defendant’s defences of exaggeration, disparagement applicalble only against competitors and Fundamental Right of Freedom of Speech of Defendant

Temporary Injunction was granted against the Defendant.

As the decision has been reversed in appeal, we will refrain from making any critical comment on the findings and approach on merits in the present decision. However, we agree as to the law of disparagement reiterated and applied by the Learned Single Judge in the present case. The key take away points from this decision are:

[3] Copra is the dried meat or kernel of the coconut, which is the fruit of the coconut palm. Coconut oil is extracted from copra, making it an important agricultural commodity for many coconut-producing countries. 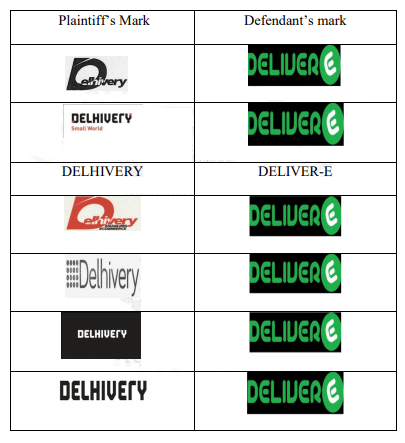 14th August, 2020 High Court of Delhi CS (Comm) No. 217 of 2020 Brief Facts: Plaintiff was engaged in the business of logistics, transportation and management under the Trademark “DELHIVERY” since 2011. Plaintiff had 27 registrations pertaining the mark ‘DELHIVERY’ under Classes 35, 39 and 42 of the Trade Marks Act, 1999. Defendant, on the…

Edgar Rice Burroughs Inc v OHIM (R708/2006-4) Board of Appeal Date of decision: 27th September, 2007 In 2004, the Applicant applied for registration “The Tarzan Yell”[1] through a sonogram. The sonogram/proposed sound mark is depicted herein below: The examiner did not consider the sonogram as an acceptable ‘graphical representation’ of a sound mark and relying…

V. Manicka Thevar Vs. Star Plough Works, Melur AIR 1965 Madras 327 Appellant filed a suit against the Respondent for permanent injunction from manufacturing and selling certain patterns of ploughs on the ground that the same was an infringement of the Appellant’s patent. The Appellant secured an interim injunction, but, on an application filed by…