Plaintiff, M/s. Hindustan Radiators Co., Station Road, Jodhpur was a partnership concern which was carrying its business since 1959 and was engaged in manufacturing various types of radiators to be used in vehicles like buses, trucks, jeeps, cars, cranes, compressors, etc. under the marks “Hindustan Radiator” and with the initials “H.R.”. Since 1959, Plaintiff had sold radiators approximately of the value of 7 crores and their advertisement expenses amounted to Rs. 2 lakhs.

Defendant was a new limited company incorporated in 1985 having its registered office at Delhi. Defendant was also manufacturing radiators under the trade mark “Hindustan Radiator”/”HR”. Defendant issued a brochure describing the goods manufactured and supplied by them.

• Plaintiff is in radiator manufacturing business since 1959 whereas the Defendant had got itself incorporated in 1985.

• The net sales of the Plaintiff since its inception proves that the Plaintiff has acquired distinctiveness as manufacturers and suppliers of radiators under trade name and trade mark “Hindustan Radiators/H.R.”.

• In view of the brochure issued by the Defendant, many people had started making inquiries from the Plaintiff about the Defendant.

• The acts of the Defendant would cause irreparable loss of business, goodwill and reputation and would cause confusion and deception in the public minds regarding origin of goods.

Arguments on behalf of the Defendant:

• Plaintiff is guilty of misrepresentation and suppression of material facts. There are other firms with practically the same name and even same initials in the same activity, which are functioning and the Plaintiff has not brought any case against them or has not challenged any of their activities and that this suit is mala fide in so far as the Plaintiff has chosen to prosecute only the Defendant. 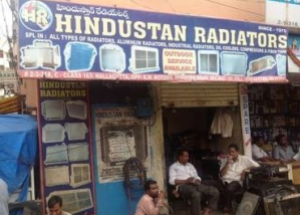 • Plaintiff is functioning from Jodhpur whereas the Defendant is to function from Delhi and consequently the right of the Plaintiff would not be infringed by the Defendant company.

• Plaintiff cannot claim any monopoly in the prescribed trade name and trademark as “Hindustan” is a common name and common property of the people of the country and “Radiator” is only a descriptive term and hence, the Plaintiff is not entitled to any injunction.

• Defendant has obtained an approval from the Registrar of Companies.

• In an action of passing off, in order to establish a prima facie case for grant of ad-interim injunction, it is incumbent upon the Plaintiff to show –

a) Plaintiff has been using its trading style and trade mark for a long period and continuously whereas the Defendant has entered into the said field only recently;

b) There has not been much delay in the filing of the suit for injunction by the Plaintiff;

d) The nature of activity of the Plaintiff and the Defendant is same or similar;

e) The goods of the parties to which the trade mark of the Plaintiff is associated are same or similar;

f) The user of the said trade mark or trade name by the Defendant is likely to deceive and cause confusion in the public mind and injury to the business reputation of the Plaintiff;

g) The sphere of activity and the market of consumption of goods of the parties are the same; and

h) The customers of the Plaintiff, inter alia, include uneducated, illiterate and wary customers who are capable of being deceived or confused or misled.

• The mere fact that the Defendant has got its name approved from the Registrar of Companies would not go against the claim of the Plaintiff in any manner whatsoever.

• Trading style and the trademark of the Defendant are similar to that of the Plaintiff with a very minute difference and the said difference cannot be brought out in the mind of the average prospective purchasers.

• It would be no defence for the Defendant that there are some other concerns which were also using similar trading styles and trademark.

• The irreparable injury in the instant case would be the likely confusion that may be caused if the Defendant is allowed to use the mark which is prima facie mark of the Plaintiff.

• The above mentioned ingredients and conditions have been considered and proved.

Consequently, the interim application was allowed and the Defendant was restrained during the pendency of the suit to use the trading style or the trade mark and pass off their goods and business as business and goods of the Plaintiff.

As photographers, we often tend to think that we are the owner of the photograph and we can post them anywhere. Sometimes, we do not even bother to ask the person for whom we clicked these photographs, or the persons who may be there in the frame. This is where we invite troubles and land…

Lakha Ram Sharma Vs. Balar Marketing Pvt. Ltd. 2003 (27) PTC 175 (SC) Appellant filed a suit claiming that he is a proprietor of a trademark ‘KUNDAN’ and ‘KUNDAN CAB’ in respect of PVC Wires and Cables and that the Respondent was using the appellant’s trademark. Appellant applied for amendment of the Plaint. Application for…

A Division Bench of the Delhi High Court vacated the injunction granted by a Single Judge against Apple Inc. (Apple) in a claim of passing of by Rohit Singh, a software developer & Vyooh Low Level Computing LLP. Facts Rohit Singh, developer of software products SplitView, DiskView and ViewScribe alleged that Apple, in its operating…

Recently, the Supreme Court of United States held that marks which are generic when combined with a top-level domain name may qualify as registrable marks provided the consumers do not consider them to be generic. The decision is in USPTO v. Booking.com B.V. By an 8: 1 majority the matter has been decided against USPTO….

Novartis AG and Anr. v. Cipla Ltd. I.A. No.24863/2014 IN CS(OS) No. 3812/2014 Date of decision: 09.01.2015 Delhi High Court Plaintiff held a Patent for INDACATEROL (for Chronic Obstructive Pulmonary Disease). Plaintiff filed a suit against the Defendant towards infringement of the said Patent. On 22nd October, 2014 the Defendant made a representation to the…