1900: He started using the trade mark ‘Polson’ which was part of his name for selling coffee.

1915: He started marketing and selling butter, cheese, flour, etc. besides coffee under the said trade mark

1930: He developed a modern dairy at Anand (Gujarat) by the name of Polson Model Dairy 1938: Polson Private Limited was incorporated to further expand the business.

1950: Plaintiff expanded its activities to the eastern part of India

1972: Plaintiff Company, in order to diversify its activities, acquired Amba Tannin & Pharmaceutical which had a running business of manufacturing Chemicals. 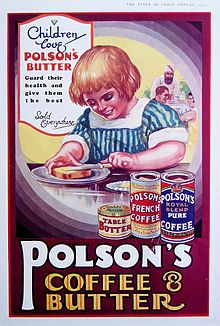 Due to certain policy decision taken by the Central Government, the dairy sector witnessed sharp changes as under the Government policy, the dairy business was reserved for the Co-operative Sectors and certain restrictions were gradually imposed on the free operations of the private sector dairy corporations. So, it is alleged that under such circumstances, the Plaintiff’s dairy operations in Eastern India had to be suspended and as the Plaintiff’s dairy business became totally uneconomical due to such restrictions being imposed under the Government policy, the Plaintiff had to suspend its dairy operations since 1978 onwards.

However, the Plaintiff continued to market its other products under his trade/corporate name Polson Limited.

Due to liberalisation policy of the Ministry of Agriculture, in August 1993, Plaintiff finalised its plans to restart its dairy operations including manufacture and sale of butter, cheese, etc. and to market the same again under the existing trademark and corporate name ‘Polson’.

Defendant No.1 company under the name and style of Polson Dairy Limited’ was incorporated in 1992. Defendant No. 1 had given out publicly that it is intending to market its dairy products under the trademark ‘Polson’. Therefore, the Plaintiff filed the present suit for permanent injunction restraining infringement of trademark and passing off. Somewhere, in the year 1993 the Plaintiff filed the present suit.

• Plaintiff had registered its trademark ‘Polson’ for dairy products which has been renewed from time to time as Plaintiff had never any intention of abandoning this trademark.

• Renewal of the three trademarks of the Plaintiff, which were cancelled by the Registrar of Trademarks, after a gap of many years is not valid.

‘Polson’ is not a common name. Defendant No.1 had not given any facts as to how Defendant No.1 adopted this word ‘Polson’ whereas the Plaintiff had given the background and the history as to how the word ‘Polson’ was adopted by original proprietor of the dairy business started under the trademark ‘Polson’ and how the said trademark had become popular amongst the consumers of dairy products, particularly of butter and that trademark has been associated with quality products of the Plaintiff’s predecessor for many many years.

On the marks of the Plaintiff being registered and registration being valid:

The first question to be decided in the present matter would be whether the plaintiff has a valid registration of trademark ‘Polson’ in its favor or not. This is indeed quite evident that there existed eight registration of trademark ‘Polson’ in favor of the Plaintiff or Plaintiff’s predecessor but they were not got renewed after 1978 for about 15 years and they were got renewed in the year 1992 retrospectively. Three trademarks which were removed from the register of the trademarks were also got restored on the register and the trademarks got renewed.

As there is no restriction placed in renewal of trade mark retrospectively and provisions of statute being not mandatory, so, prima facie, I am of the view that the plaintiff is presently the owner of the registered trade mark ‘Polson’ and the renewal and the restoration of the trade mark given to the plaintiff by the Registrar, Trade Marks are not invalid.

On Non-use of the mark by the Plaintiff:

Plaintiff had not been carrying out business of dairy since 1978 but it had been carrying on manufacture and sale of Chemicals under the trade name ‘polson’, it becomes evident, prima facie, that dairy business had become uneconomical because of certain restrictions being placed on the export of the dairy products of the Plaintiff from particular district and thus the Plaintiff had stopped the dairy business for some time. But mere non-user of the trade mark for a short period does not amount to abandonment. The Hon’ble Court relied on M/s.Garden Perfume (P) Ltd. v. M/s.Anand Soaps & Detergents; 1994 (28) DRJ 113.

The Court further relied on Kamal Trading Company v. Gillette U.K. Limited; 1988 PTC 1, to hold that a break in user of trade mark does not destroy its reputation if the mark is distinctive and continues to survive.

Even otherwise, in the present case, once it is held that trade mark stands registered in the name of the Plaintiff validly, prima facie, the Defendant had no right to use said trade mark of the Plaintiff and that is the effect of the provisions of Sections 28 & 29 of the Act.

It is evident that Defendant is trying to prima facie take benefit of the reputation which the trade mark ‘Polson’ enjoyed in order to deceive the general public that Defendant company is successor-in-interest of the old company for reviving the business of dairy product for having the same high quality of products as used to be marketed by the Plaintiff or Plaintiff’s predecessor a few decades ago.

Super Cassettes Industries Ltd. v. Music Broadcast Pvt. Ltd. 2012 (50) PTC 225 (SC) ISSUE: Whether on a complaint made to the Copyright Board under Section 31 of the Copyright Act, 1957, the said Board under Clause (b) of Sub-section (1) can pass an interim order in the pending complaint. In other words, whether the…

Edgar Rice Burroughs Inc v OHIM (R708/2006-4) Board of Appeal Date of decision: 27th September, 2007 In 2004, the Applicant applied for registration “The Tarzan Yell”[1] through a sonogram. The sonogram/proposed sound mark is depicted herein below: The examiner did not consider the sonogram as an acceptable ‘graphical representation’ of a sound mark and relying…

Rolls-Royce Plc and Anr. v. R.R. Motors Pvt. Ltd. 1997 PTC (17) 60 Brief Facts: • Plaintiff No. 1 was the proprietor of the mark Rolls Royce and the ‘RR’ Logo in a shield and was using the same for automobiles, engines, chassis etc. Plaintiff No. 2 was the Indian arm of Plaintiff No. 1….